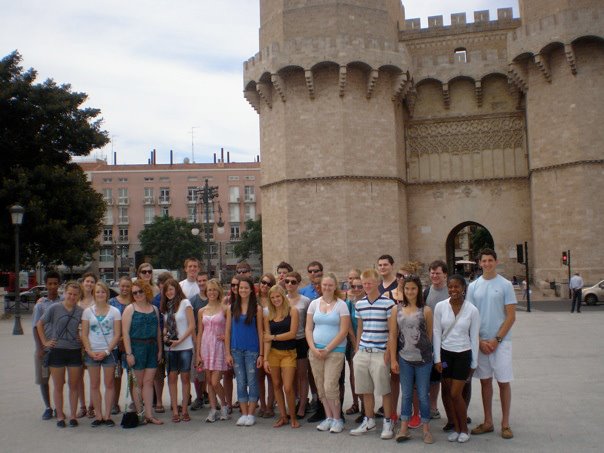 Enjoying last days in Valencia and Getting ready for Madrid!

Unfortunately good times always have an end! And we are very close to it :(

Last week in Valencia was for some cultural activities and for preparing the activities for the big day: The Farewell Party. The students have been practicing for their individual and group performances with too much effort.

On Tuesday, we watched the third film in our spanish film series. It was time to watch Pedro Almodovar's "Volver", a dark drama-comedy film from one of the most important spanish filmmakers.

On Wednesday, we went to the beach to relax and have fun. It was a sunny afternoon in Valencia so kids used the corresponding sun block.

On Friday afternoon, the group went to Museo Taurino and Valencia bullring. We visited different places in the bullring and played to be bulls and bullfighters once inside. We had a one-hour tour and learned about Spain and Valencia bullfighing. The kids saw stuffed bulls and learned how bulls are prepared for each bullfight. Olè!

On Friday night, 8 kids went with Israel F to the Hombres G concert. The venue was packed and full of energy. They could enjoy the music from one of the most famous spanish rock/pop bands of all time.

On Saturday they visited the Fallero Museum where they could see the Ninots (like big dolls or puppets that are displayed in March during the famous "Fallas Valencianas") that werent burnt as the tradition demands. See: http://en.wikipedia.org/wiki/Falles

On behalf of the Valencia team ( Victor, Melissa, Kyle and Israel F) I must say we are totally happy to have this talented and wonderful group. This group is very special and unique! Be proud you are their parents or guardians! We feel happy when they tell us everyday that you are the most awesome family!


Most important event of the week: Independence Day on Wednesday. We heard the national anthem (instrumental) early in the morning on July 4th, we ate hamburguers and hot dogs for lunch in the cafeteria and we celebrated it  with games and splashes on the Mediterranean sea (see picture below the entries). Some students got together and decided to go for dinner to an american restaurant downtown.

Last Tuesday, we had our traditional screening of spanish movies with "El Laberinto Fauno". The film mixes spanish history and fantasy. We plan to have more screenings for the weeks remaining.

Last Thursday was for a Flamenco show! The kids experienced the traditional music from Andalucia. They danced on stage and enjoyed one hour of a great show. Ole!


Last Friday, we had our last excursion of the program to a valenciano town called Xativa. It was a pearl! We climbed a mountain to reach a castle (actually we took a small train that took us there). The kids explored places such as the guard points, the gardens, water deposits and dungeons. We also visited a museum where we saw two important paintins from local and important spanish painter Jose de Ribera.


On Saturday we visited the Roman Ruins that are under Valencia. It was a trip to an ancient civilization that was present in our city for many years. During the visit, the kids could see the remains of important public, political and cultural places for this empire


These two weeks we will be working on our performances for the farewell party. Meaning that you have two weeks to prepare the welcome party over there! Start thinking on how to surprise your kids since they really miss you all!

Last week was full of adventure,culture and soccer. The week started with a visit to one of the most famous porcelain companies around the world: Lladró. The kids had the chance to see the whole process a porcelain has to go through to reach that magnificent elegance, perfection and beauty that is very common in Lladró pieces.

On Tuesday, we started our Spanish Film Series that we offer each year to our students for free. We screened Oscar winner film "Mar Adentro" at school.

On Wednesday, we went to the park to relax a little bit. Some students played volleyball, some others played frisbee or ran. One of our students took his guitar with him and played and sang great songs to us. We have potential artists in the group!

Last Thursday was for biting nails and testing heartbeats. Spain played Portugal as part of the Eurocup semi-finals. After 120 minutes the game ended 0-0 and the only way to get the finalist was through penalty kicks that bring a lot of tension. Spain won 5-3 and reached an Eurocup Final for third time in its history. In fact, if Spain wins on Sunday Night it would be the first time in history that an european team wins two Eurocups and a World Cup in a row. In that case, your kids would be part of spanish soccer history and better than that they would be living it in Valencia with their host families.

And..... and.... and ....... Friday came with a great excursion  to Barcelona. It was a total success!!!We left Valencia around 6:03am.We visited the famous Sagrada Familia first. Some kids had the chance to see the interior and some others decided to go shopping around the place. It was so beautiful and nice! We had lunch in a famous park called Parc Guell. This was designed by the famous architect Antoni Gaudi. We also walked along Paseo de Gracia and saw  Gaudi´s Casa Mila and Casa Batllo facades. At the end of the visit they had free time to explore Las Ramblas, the Gothic Quarter, the market and the Port. It was simply fantástico! On our way back to Valencia we celebrated Brianna's birthday with candies and plenty of congratulations.

Best wishes from all your kids . They told me to say: We love you family  and  HAPPY 4th of July! Long Live America!
Publicado por Isra en 6:24 No hay comentarios:

June 24th, time flies, huh? Two exciting weeks in Valencia left behind and four more to come. Besides our spanish classes in the mornings and the artistic activities in the afternoons we had fascinating optional activities that your kids could enjoy during this past week. On Wednesday we went to Park Gulliver where they ran, played soccer and frisbee and had fun on different slides.

Last Thursday was time for ties, beautiful dresses and elegant suits. Reason: Visit to Valencia City Hall. A representative from the local government received the group in the main room where politicians debate  different laws for Valencianos. Valencia Council Member Ramòn Isidro Sanchis´ speech about Indiana University Honors Program  highlighted the  high level of spanish of our students and stated it was an honor to have the best students  from Indiana in Valencia. This event was so relevant  that we made the news!

To close the week  we decided to move our 206 bones with the Dance day on Friday. So you should demand your kids to teach you all the latin and spanish dances they learned with us and dance those with the whole family in the living room. I will suggest to dance with them Asereje,  Waka-waka and different salsa songs . After those dances you will probably have to change the floor.


On Saturday we went to Ciudad de las Artes y Ciencias where we felt like in a different planet with all those futuristic buildings. We visited the biggest aquarium in Europe where we saw a dolphin show and plenty of sea animals. Some of the kids also visited the  Museum of Science and got an idea to invent a machine where they could transport people from Indiana to Valencia in few seconds. Let's see if at the end they can build it!


One last thing, your kids approached me yestesday after lunch and told me to let you know these few but strong words: I LOVE YOU  FAMILY! THANKS FOR LETTING ME ENJOY THIS EXPERIENCE IN VALENCIA!

We are enjoying sunny Valencia!

Dear families in USA,
I am glad to let you know  that our first week in  Valencia has been great! The flight to Madrid arrived a little bit late due to air traffic in Chicago but Spain was waiting for us. We arrived in Valencia early afternoon and host families were anxious to meet their american kids. The kids spent the weekend with their host families eating paella valenciana, valenciana salad and sweet valenciana oranges. They also used those two days for recovering from the jet lag. Day one was for the orientacion with students and host families. They also had their fist day in the restaurant where they  had their first contact with spanish food. During the first week they ate squid, paella with rabbit, valenciana salad, merluza (kind of fish), tortilla española ( scrambled eggs with potatoes and rice) and much more yummy, yummy food!. We visited Old Valencia last Thursday and they learned about  Valencia important historic sites such as Serrano Towers, The old City Hall, The Cathedral and the Virgin Square. The trip ended in a traditional market where they bought fruits and could see the different food valencianos buy. Our fist excursion also took place this week. Last Friday we went to montainous and rocky Cuenca in Castilla-La Mancha region. Cuenca is very famous for its hanging houses and  beautiful landscape. Guess what?  During the weekend your kids are going to the beach to enjoy the mediterranean sea and sun ( with  sunblock and many  big bottles of water!).
Greetings for fantastic Valencia!